Now that the holidays are over, I can spend some quality time getting caught up on releases from the end of 2012 that will carry us into 2013. First up, Bruno Mars. 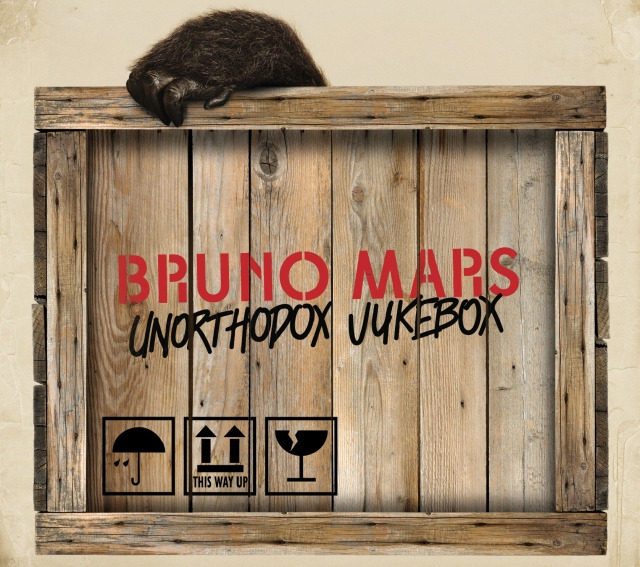 Bruno seems to be intent on being the next Prince. Those are not small shoes to fill. Well… ok, actually the shoes may be small but… you get my point. Maybe even more so than on his debut Doo-Wops and Hooligans, Bruno isn’t happy to just be R&B or Pop. He wants to be rock. He wants to be reggae. He wants to write stripper anthems. He even wants to do jazz hands. So the title Unorthodox Jukebox is rather fitting.
So what has Mr. Mars been up to? He starts out by singing about the woes of keeping up with the pace of “Young Girls”. I hear shades of Coldplay in this one. This leads to the runaway hit single “Locked Out Of Heaven”. This one seems to bring all of the elements together perfectly for a hit. We have guitar and vocals that recall The Police’s “Roxanne”, but also 80s new wave rock in general. But the modern touch is the sampled “y-y-yeah UHHHHH!” bit. It may also be one of the dirtiest hits on the radio right now that isn’t hip-hop, full of euphemisms like “Open up your gates ’cause I can’t wait to see the light”.
Next is Bruno’s pull-out–the-stops sexed-up slow jam, “Gorilla”. Starting with “a body full of liquor and a cocaine kicker”, and ending up “you and me baby making love (and later on, fuckin’) like gorillas!”. So romantic… if you’re a true animal.
“Treasure” picks it up again, with a funky beat and bassline reminiscent of Patrice Rushen’s “Forget Me Nots” and early 80s R&B, especially in the vocal harmonies. definitely a feel-good jam. “Moonshine” follows behind, which is a little darker in its vibe. It also has an 80s feel, but it’s hard to pinpoint the specific inspiration for this. Maybe a cross of “Eye In the Sky” and an R&B bassline.
The next track is one of my favorites. “When I Was Your Man” is a sad reflective post-breakup song performed by just Bruno and a piano. This is one where Bruno’s natural voice shines and you realize he’s talented enough to not always need big production to be effective. “Natalie” has a spooky atmosphere to it, like the ghost of the relationship that still haunts him in the lyrics. The beat is a bit different for him, and reminds me of Will Smith’s track “Switch” that was a minor hit a few years back.
Next Bruno takes us to the islands, with his version of dub reggae in “Show Me”, a sexy track that could end up in an after hours vacation commercial. Then we have Mars’ ode to pole dancers, “Money Make Her Smile”. With a rock stomp and guitar laced in there, this isn’t a happy stripper party song. The music paints a much more grim vibe than the lyrics do and give away the intention. Lastly rounding out the album at ten tracks is “If I Knew”, a 60s style bluesy soul ballad. He really throws his emotions into this one, and it’s a great ending to a short album.
If you get the Target deluxe edition, you get five more tracks. Only one, however is a new song. “Old & Crazy” is an old time piano jazz number, where Bruno shares vocals with the massively talented Esperanza Spalding. The song is barely 2 minutes but is a lot of fun. The next two tracks are demo versions of “Young Girls” and “Gorilla”. Both are acoustic, featuring only Bruno and his guitar. These make for interesting listening, as the production makes a huge difference in how these songs come off. Then we have the Futuristics remix of “Moonshine”, which is really good. The mix goes for a Justice Cross vibe, and it works quite well. In fact I might like the remix more than the original. The final bonus track is the Major Lazer remix of “Locked Out Of Heaven”, which is a reggae rework of the song. Also interesting, fun and not just a throwaway remix.
Final thoughts? The variety on this album is great from one track to the next. Mars isn’t afraid to tackle different genres, sometimes within the same song, and manages to keep a pop sensibility the entire time. My worst complaint is that like many pop albums, the volume is driven way into the red at times, causing unnecessary distortion. This simply needs to stop, as there is a lot of detail in the production that deserves to be heard clearly. The regular edition of the album is quite short at only 34:51. They could have added on the fairly recent Twilight single “It Will Rain” easily. Even though it’s a couple bucks more, the deluxe version is pretty decent and makes you feel like you’re getting a bit more. That being said, there’s really not much filler in that 35 minutes.

Check out videos from the album:

“Locked Out Of Heaven”