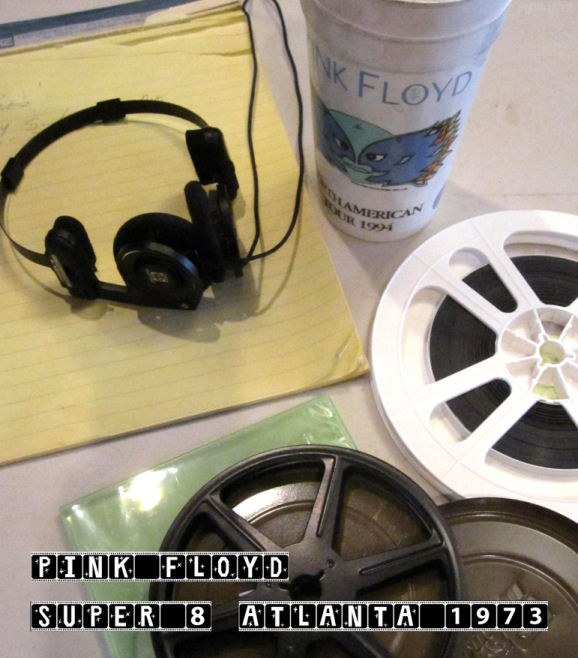 Normally I wouldn’t write a review for a video that is only 15 minutes long. However this is a special case. As a Pink Floyd collector, there are several “Holy Grail” type recordings that have surfaced over the years that most of us assumed did not exist. Even when making the Dark Side of the Moon Immersion Edition box set, the band spoke yet again about their regret that the shows of the time were not filmed. Sure, some official and plenty of unofficial audio exists, but we only had pictures.
Lo and behold, when Yeeshkul came back online a couple of weeks ago, one of the first major releases was this. Super 8mm Atlanta 1973 is a Blu-ray or DVD (take your pick!) that features exactly what it says, 15 minutes worth of clips of footage from a 1973 Dark Side of the Moon tour show. The footage, as was the norm for such cameras, was originally silent, but has been painstakingly edited by Harvested Records to the audio from a Boston show 10 days earlier.  The film quality is pretty astounding considering its age. The audio has crossfades to make the transitions not so jarring. Because this is available in HD, I recommend putting it on a big screen, turning out the lights, and imagining for a brief moment that you were there.
Kudos to  the filmer, the transferrer and the editor for this one. Whatever you do, do *NOT* pay money for this little gem. It is available at the torrent site Yeeshkul.com for free, thanks to the generosity of a few collectors, along with other great material you may not know exists.

Preview it here (unfortunately the high quality version of this was made private. this version is not the full quality but you still get the idea):

Tags: 1973, blu-ray, dark side of the moon, dvd, echoes, harvested, live, obscured by clouds, pink floyd, video, when you're in, yeeshkul