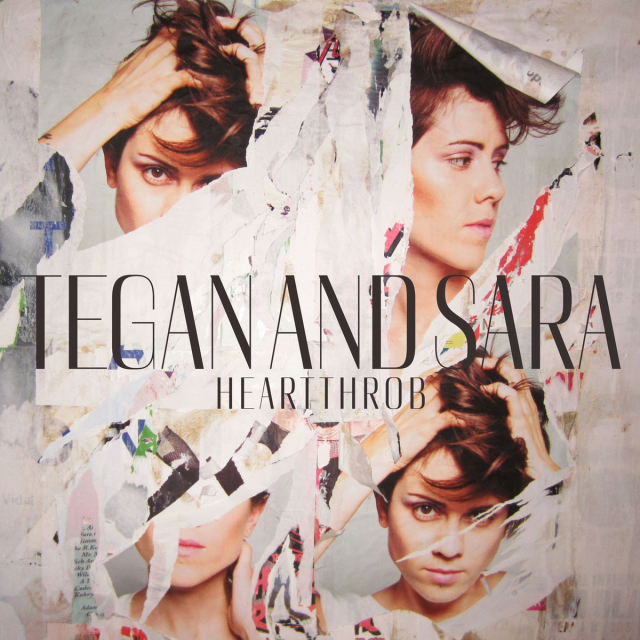 Here’s one I didn’t see coming. As I stated in my original review, I only knew of a couple of Tegan and Sara songs before this year. For Heartthrob, the girls decided to try on a pop sheen and see what that could do for their already great songwriting. Much to many hipsters’ dismay, their songs work great in a pop construct and production style, and brought their first mainstream hit “Closer”. But the songs are still well written. I found myself coming back to this album a lot this year. It’s “start to finish” good stuff. Here’s my original review from earlier this year when it was released:

Is Heartthrob, Tegan and Sara’s seventh studio album in fourteen years going to be the lucky one? The one that breaks them into the pop world? Reading anything said so far about this album it would certainly seem that this is the expectation. But maybe we’re reading too much into it. This album has much more pop gloss than previous albums, more electronics, and just sounds more radio-ready in the production style. But the twin Quin sisters have almost been pop sensations before, with clever infectious tracks like “Walking with a Ghost”, “Alligator”, and “Back In Your Head”. These two know how to write catchy melodies that still contain meaningful lyrics. I think they just took one more step towards the mainstream this time.
The album kicks off with the first single, “Closer”, blasting immediately towards the pop stratosphere. But if I heard this song and I wasn’t told who it was, I would still easily recognize that this is Tegan and Sara. They have an inescapable beauty in the way the two harmonize on choruses. It is that part that makes this catchy and pop much more so than the synths and club-mix-ready beat. In fact I would love hearing this on the radio once in a while, as the song still feels genuine.
The next track “Goodbye, Goodbye” is one of the most happy sounding goodbye songs I’ve heard in a while. But the unique vocal quality in this one is what keeps it from being a song that could have been offered to Kelly Clarkson. “I Was A Fool” starts out almost feeling like Roxette’s “Listen To Your Heart” and launching into an very smooth chorus. Here is where I realize that at times Tegan and Sara have an Abba-esque quality when their voices intertwine. It works! This should be a hit. Sadly this is probably dependent on how many other things on the radio sound close enough to it, rather than letting this track stand out as radio should do.
“I’m Not Your Hero” continues the winning streak. The melody is simple. The beat is basic pop rock. But the blend of the right elements and the right vocals make it shine. “Sometimes it feels like the side I’m on plays the toughest hand”. Could she be talking about being an indie-pop hero? Doing her “best to walk the finest line”? It leaves me wondering if that song is her “Good Riddance”. I love it!
“Drove Me Wild” in some ways reminds me of early nineties alternative, updated with a modern production veneer. “How Come You Don’t Want Me” is full of post break-up jealousy and hurt but still manages to have a bright shiny undercurrent. “I Couldn’t be Your Friend” is also one of the standouts here, recalling some of the innocent sunshine of new wave bands like Haircut One Hundred, but mixing that into their own style perfectly.
The album takes more of an indie turn at “Love They Say”, getting a bit moodier backdrop for a more upbeat set of lyrics about love persevering all odds. “Now I’m All Messed Up” starts out a little off the beaten path as a tender song with a simple piano, but then blasts into a poptastic chorus and lots of little ear candy nuances to bring the song to life.
The final track, “Shock to Your System” is my favorite of the bunch by far. It has a solid but sparse beat that reminds me of Peter Gabriel’s “Games Without Frontiers” in how it grounds the song in a dark shadowy place. It’s also the song that bridges the gap between the poppier side of T&S and their earlier tracks like “Walking With a Ghost”.
So yeah, there’s a glossy sheen to Heartthrob. But not to worry. It’s *still* Tegan and Sara. They’re just trying on some new clothes. But these clothes aren’t wearing Tegan and Sara, rather *they* are wearing the new clothes. Whom is in those clothes is the reason it still works.

Get your own copy of Heartthrob HERE:

Check out these videos and performances from the album: