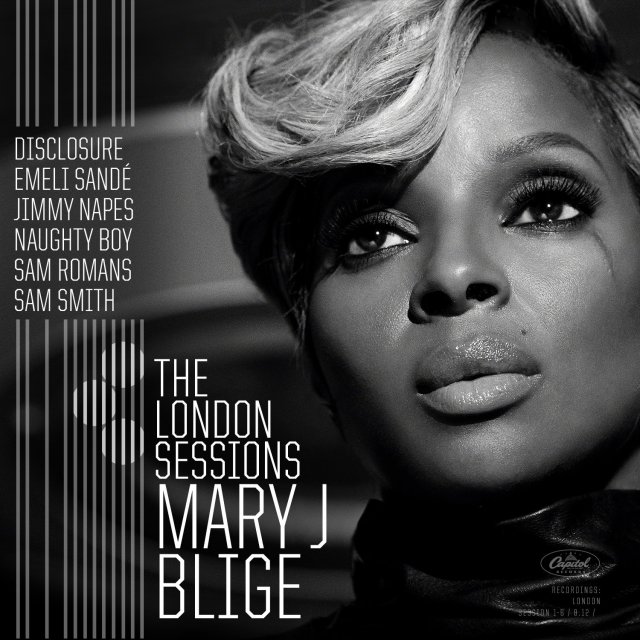 Last summer, Mary J. Blige put out a brand new album with very little fanfare. It was the soundtrack to the comedy Think Like A Man Too. The album was pretty decent for a Mary album, containing a few deep slow songs about relationships that seemed tailored to the film, and a couple upbeat tracks including a fun remake of Shalamar’s “A Night To Remember”. But like with My Life II, I skipped out on picking it up. The movie sort of came and went quickly, and with the album being attached to the movie, I don’t think it got a chance to stand as its own thing. I listened a couple times though and while it was good, I guess it just didn’t grab me like some of her previous albums. It seemed to be too firmly planted in the past. Without even having to ask her why, she answered back later in the year by doing something brand new. She relocated herself to England. After all, some of the best soul and dance music has been coming out of England the past couple years, all with new styles and fresh perspectives. She took cues from the positive response to a remix collaboration she did earlier last year with Disclosure for their UK hit “F For You”, giving the track that extra thing it needed. One thing led to another. As the album cover states, Disclosure, Emile Sande, Sam Smith, Naughty Boy, Sam Romans and writer Jimmy Napes all got together with Mary and gave her a fresh perspective. If you’ve been paying attention, all of those artists are part of a big family of British music that have been working on each others’ projects. The result of this is my favorite Mary J. Blige album since The Breakthrough.

Sure, she has memorable songs on pretty much all of her albums. But once you’ve bared your soul the way Mary does, it’s hard to keep finding new ways of baring it again over and over in the same construct without it feeling a little forced. In a new setting, with new people around, Mary reached down and pulled out some new things that only collaborative inspiration could pull out of her. I was already intrigued looking at the guest list. Many of these artists are some of my favorites of the past 2 years and they bring new ideas to the table. But their sound is usually clear and not overproduced. It gives the songs room to breathe.
The album kicks off with a completely new style for Mary in the bluesy doo-wop of “Therapy”. The therapy she’s talking about going to twice a day.. is it music? Is it something else? Is it a shrink that’s available quite a lot? The song has such a fun bounce and recalls a bit of Amy Winehouse’s “Rehab”, with Sam Smith guesting on backing vocals. “Doubt” has Sam Romans on backing vocals and is a piano based song about determination and believing in yourself. This is followed by one of Mary’s best ballads in years, “Not Loving You”. It’s a quiet reflective song that makes one clear point – “there’s only so much I can do, if you’re not loving you”. This is Mary at her most powerful. Sam Smith is a co-writer on this one and you can hear his stye in here without him actually singing on it. “When You’re Gone” follows, which is an acoustic neo-soul love ballad that’s also very effective. I can’t remember the last time I hear Mary sing with acoustic guitar (I’m sure she has, but memory fails me). The simplicity is perfect.

Next we have the first collaboration with Disclosure, which isn’t am EDM track, but rather a funky track with some vintage sounding keyboards that somehow sound futuristic. Disclosure is a group that blows me away with where they are taking electronic music. They get the soul and the groove of it rather than the bombast and the same ol’ standard dance beat. The shuffle to this is fairly irresistible to me and it gives Mary a different way to sing. Oddly, this reminds me of Paul McCartney and Wings’ “Wonderful Christmastime” with it’s strange sounds. Then we head straight to the club for some house music. No David Guetta EDM pop, but actual *house* music – with piano. Produced by Darkchild, who must have absorbed the new vibes as well, because this sounds very European. This one works quite well and the effects like the slowed down and sped up vocals give it that extra thing to feel different from the norm. Rainy day house. “Long Hard Look”, produced by Craze & Hoax – this one’s hard to describe. It has this behind-the-beat flow to it that I usually dislike when rappers use it. Call it an OCD thing. But the way the songs flows, the vocals actually jump before and then back behind the beat again, which is intriguing to me. I kept going back to replay this one. A great song about how people think what they are missing is better than what they have.

Next is one to place in the “Not Gon’ Cry” category of Mary’s classic ballads, the poignant “Whole Damn Year”. This is a song for the emotionally or physically bruised and about the time it takes to heal along with the fears that follow. It was co-written by Emile Sande, and has a stripped down slow paced beat and a piano and that’s all it really needs. This is the Mary I originally fell in love with, yet this sounds new rather than sounding like a repeat. This is followed by a faster, yet I hate to say upbeat because it’s more pensive than happy, track called “Nobody But You” also cowritten and featuring subtle backing vocals by Sam Smith. It has the pace of a house track but with some differences in the production – by MJ Cole – that make it sound like an original style. There’s still a simplicity here that helps the song. Then we have “Pick Me Up”, a collaboration with Naughty Boy and Emile Sande. This one has a beat somewhere between UK Garage and house with a sample of… I think an oboe that gives it a nice flavor. This track isn’t one of the ones that jumps out at you, but it’s really nice regardless. There’s really no songs here I’d skip out of boredom.

Now we get to “Follow” – credited to Mary J Blige and Disclosure. This one is a true Disclosure track and would be right at home on their stellar Settle album. Again I think Disclosure is one of the best and most original things to happen to dance music lately and the groove of this track melds with Mary’s voice perfectly. It has just right amount of head bob in it. The album is then brought to a close with a stark ballad called “Worth My Time”, a beautiful piano based torch song that only Mary can do.

The major lesson to be learned here is that fresh air can do someone a lot of good. Mary not only changed locations, but switched labels to Capital this time, surrounded herself with new writers and musicians that are at a creative peak. The result is one of Mary J. Blige’s finest and most refreshing albums.

Get your copy of The London Sessions HERE:

Check out the videos: