REVIEW: MARINA AND THE DIAMONDS – FROOT… 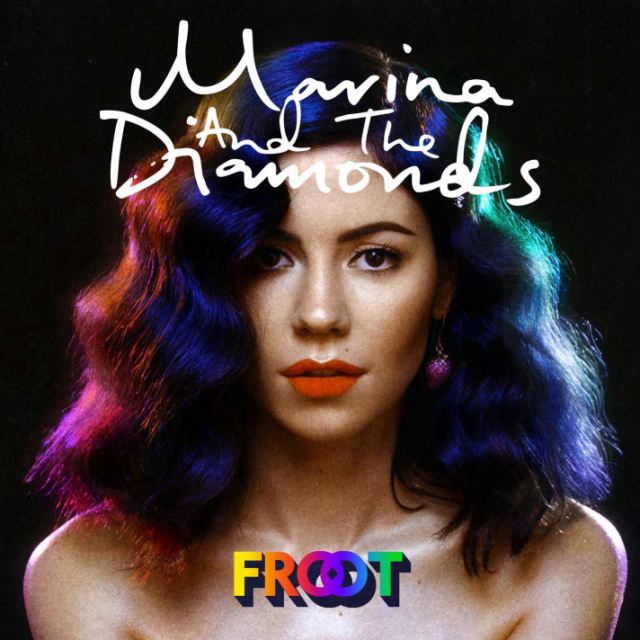 Marina Diamandis, or Marina and the Diamonds as she is professionally known, most likely for those that can’t spell, is back with her third album, FROOT. Last time around, with her concept album Electra Heart, Marina took on the persona of a pop princess superstar, singing songs that highlight both the facade and the reality of life in the spotlight. This time there’s no theme. This is simply a very talented voice singing about what is on her mind. Sometimes you can dance up a storm to it, and sometimes you should just sit down and listen. But as a full album, FROOT gives enough different flavors to stand as an album and not just a collection of singles and filler. The album demonstrates the difference between Marina and many of her peers. The material is written and composed by Marina, and not a team of writers. In a sense it is true singer-songwriter pop. Many of the songs have been released as singles already in advance of the album, since “Froot” was released as the first single in October. But what constitutes a single anymore? Is it the presence of a video on YouTube? Is it merely that the track is out there officially? While I realize that times have changes and the industry looks for new ways to catch people’s attention, it hardly gives people time to absorb and get into a song before the next one comes along I think. Maybe that’s just me.

The album starts off on a somber note. In the deceptively titled “Happy”, Marina sings about finding that maybe happiness exists in people around you. As someone who is more of a loner than not, this song really resonates. “I believe… in possibility”. This is followed like a big ray of sunshine with the gorgeously produced and performed titled track. It’s a love song that is basically about pining for the right one to come pluck and enjoy. The production has a bit of synthpop, a bit of disco rhythm, a really great bass groove, and top notch layered melodies. One of Marina’s strong points is that she knows how to use restraint with her voice. She has killer pipes but knows how to reel it in a bit to multitrack her voice. This creates some dreamy sounding melodies.

Then the horns pop out a bit. “I’m A Ruin” is a song of impending breakup, from the point of view of the game player right before the breakup. Usually breakup songs are from the point of view of the scorned or the victim. It’s not an easy song, but it has a sad beauty. To go along with that, the next song “Blue” seems to be about someone post-breakup, wanting their ex back, not out of love, but as an act of selfishness to cure loneliness and guilt. This one is an upbeat dance song though, so the mood is deceptive if you aren’t paying attention and only hear “give me love, give me dreams”, and not “No, I don’t love you – no, I don’t care, I just wanna be held when I’m scared”. Again not your typical love song, but a very real story that happens every day. This is followed by a rock song, “Forget”. This a bouncy song with a moody undertone about the hard lesson that forgiving and letting go of things is the only way to heal and free yourself of the past. So far all of the songs have a thought provoking level rather than simply a cheap “baby baby” and “put your hands up”.

“Gold” finds Marina somewhere between a doo-wop vibe and maybe something Beck would do in a more mellow (but good) moment. The lyrics are about Marina hitting a point in life that she questions what is most important to her, realizing fame and money may not be the answer. There’s a line from this that should have been on the album’s sticker, “You better make a way for a Greek gold rush”. The following track, “You Can’t Pin Me Down” is pretty self-explanitory, where Marina states “Do you really want me to write a feminist anthem? I’m happy cooking dinner in the kitchen for my husband”. Musically the song is a fairly simple lighter weight affair to give emphasis to the lyrics.

“Solitaire” is one of the standouts here, an almost trip-hop ode to being ok being alone. In stark contrast to “Happy” earlier, the song paints a picture of someone who is sometimes happy alone, and maybe sometimes isn’t. As the previous song suggests, Marina, and many of us are not easy to pigeonhole. This is a stark, pensive song and one of my favorites here. This is followed by one of the most interesting tracks lyrically, “Better Than That”, which appears to be about a woman who manipulates men to get what she wants. I had even seen talk on the net about this possibly being about a woman who cries wolf about rape to destroy men’s lives. While that is a very touchy subject, I am sure there are some scorned women who have used this ploy before. And it’s horrible, because it takes away from the cause of those who have been the actual victims of rape. But in every situation in life, there’s someone out there who misuses trust to get away with what they want. And I think that’s the position the character in this song is in, where Marina is speaking to her “I’m not passing judgement on her sexual life, I’m passing judgement on the way she always stuck her knife”. Deep and somewhat disturbing.

“Weeds” is a different take on a post-breakup song. This is more of a upbeat pop-rock song that is essentially saying that which we experience from our exes shows us things about ourselves but rubs off on us a bit, and no matter how we try to suppress that, you really can’t unlearn something about yourself. There’s this really cool distortion effect on the brief guitar solo in this one that I really like. This is followed by one of, if not my favorite track, “Savages”, about the dark side each of us has. “Underneath it all we’re just savages, hidden behind shirts, ties and marriages”. And one to quote, “I’m not afraid of God, I’m afraid of man.” So this is the song that actually mentions “another day, another tale of rape”.. maybe I misread which song was about what, or maybe these ideas go hand in hand. Lots of food for thought for a pop album.

“Immortal” is a gorgeous and thoughtful song to end with. This one is about realizing that the way to live forever is in what we leave behind in ideas and other people. Musically this has a slow crawl that fits perfectly. Emphasis on the detail and atmosphere in this one. This song really brings the album to a proper close.

Even though I haven’t listened to Electra Heart for a while, I think I enjoy this album more. Rather than making a point by making an example out of a caricature, this album looks inside for questions and answers and is one of the more thought provoking pop albums out there. Sure I like a simple happy pop song. Sometimes we need a song that doesn’t require much thought but is just about feeling good. But FROOT straddles both lines. Most of it is probably a bit too deep to be placed on American radio next to the likes of Rihanna or the latest Calvin Harris track. Sadly, this is just because American radio is so unlikely to try something other than what’s already been done. But the music is still pop at its core, but with more thrill thrown in, a lot of heart, and even more brains and introspection. That makes FROOT a satisfying main course rather than merely a sweet dessert.

Pick up your copy HERE:
CD

Check out some videos from the album: