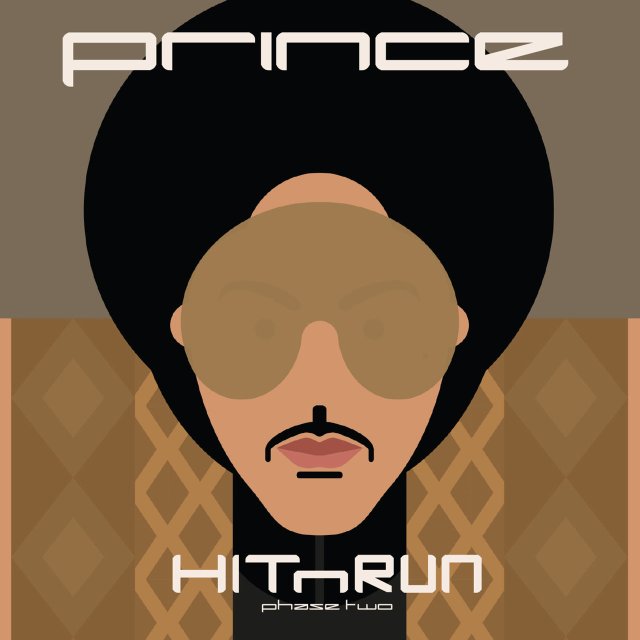 With very little fanfare, in mid-December Prince released the second “phase” to his HITnRUN Phase One album released earlier this year. The title link really is just in name only. While Phase One was produced by Josh Welton instead of by Prince, Phase Two doesn’t have the same electronic-driven sound and is definitely a Prince production. Phase Two, much to the relief of many, is a return to more of a classic funk-soul-pop-r&b Prince sound. Most importantly in my opinion, this includes the return of Prince’s stellar horn section. The track selection for this one has been culled from several different recordings from the last few years, including revamped versions of singles like “Xtralovable”, “Rocknroll Love Affair”, and “Screwdriver”, as well as unheard jams like “Big City” and the excellent ballad “Revelation”. Unfortunately, the only way to purchase the album is digitally at this point. Tidal offers it in high def audio FLAC, but only as a package deal with Phase One, which runs $26.99. This is an annoying double-dip if you have already purchased Phase One on CD. To buy the mp3 version separately, I’d suggest iTunes instead, where they sell just Phase Two by itself for $10.99. According to one of Prince’s tweets, a CD version is forthcoming, but no date has been given. No mention of vinyl on either Phase One or Phase Two yet, which seems silly to me with such a resurgence in vinyl sales. So here’s the breakdown of the album track by track:

“BALTIMORE”
A protest song for peace, released as a single earlier this year, is an interesting and surprisingly upbeat way to kick off this album. Unlike “Planet Earth”, the album isn’t dragged down moodwise by this type of song. It has a buoyant beat, something like “Raspberry Beret”, and features 3RDEYEGIRL on backing. It is also quite a contrast to the fantasy style beginning of “Art Official Cage” or the pop-tastic “Million Dollar Show” on Phase One. The strings on this song make it even catchier. For once I’m not put off by the trying-too-hard aspect of one of Prince’s social outcry songs. This one works and is still a catchy uplifting song.

“ROCKNROLL LOVE AFFAIR”
This bouncy but simple pop-rock tune was released as a single back in 2012. However the version here would be his “reloaded” version, boasting the addition of some tasty horns added to uplift the tune a bit more. While I’ve read that some had disdain for this tune, I was impressed by how laid back it is. I keep saying this, but I feel Prince is at his best when isn’t overtrying to impress. This is a simple song quite literally about “two people in love with nothing but the road ahead”. While I like some of the extendedness of the longer original mix, this shorter version packs more punch. It fits nicely in the mix here, so I understand its inclusion.

“2 Y. 2 D.”
This is one of my favorites so far. It’s a funk jam that improves on some of Prince’s better James Brown style funk moments, with some flute used to spice up the horns in a way we haven’t really heard since “Gett Off”. And it’s Prince singing about sex, in a sexy way, without him having to curse to get his point across. While those of us who have no problem with cursing have had to get used to that fact Prince has sworn it off, songs like this one gives us hope that Prince has in no way lost his libido. It’s quite simply about a woman who’s “old enough to do you, but too young to dare”. This stands as one of his funkiest jams of his last few albums.

“LOOK AT ME, LOOK AT U”
A laid back, jazzy tune that nestles its place somewhere near “Money Don’t Matter 2Nite” and “She Spoke 2 Me”, with much of the same bottom end of the former. So far not a dud yet on this album. No cringes, like during the first listen of Phase One. Everything feels real and organic. This song in particular has that rain day feel to it. Very much in the spirit of the soulful side of early 90s NPG.

“STARE”
I’m so happy that this revved up funk workout has a home on an album. It was released as either an olive branch or a rub-it-in-your-face tease to Spotify earlier this year as the one track you can listen to after he removed his catalog from it and went to Tidal. It is one of his beat funk dance tunes of this decade, for sure. It even recalls the breathy pumping of “Sexy Dancer” and a little stab of “Kiss”. This one deserves a 12 Inch Extended Mix. Now for kids too young to remember (2Y2R?), the twelve inch single was an art form that Prince was the master of in the 80s. Man, how I miss that. This jam could go on forever. And I’m sure when it was being written it did. Plucky guitar, bright shimmering horns, and you can actually picture Prince’s classic dance moves without seeing him. I’d pick this as my favorite on the album but there’s more…

“XTRALOVEABLE”
Of all tracks on this album, the origins of this one go back the furthest, to around 1982 in the 1999 sessions. If you can find the demo version of it, it has a few more risque lines in it that would actually be a little cringe-worthy now. Prince completely reworked this song in 2011 and released it as a standalone single that went fairly unnoticed. That version has a rap section from Andy Allo. But it was missing something special. In 2013, Prince reworked that version with the NPG horn section and gave it that extra shine. Andy’s rap has been replaced with the song’s crowning moment, a horn breakdown on par with the classic “Sexy MF”. Since this version was released on 3RDEYETUNES as “XTRALOVEABLE RELOADED”, it has been my most played Prince track. Much like “Stare”, it would be a perfect candidate for a 12 Inch Version. Ten minutes of this kind of fun would be absolute perfection. This also might be my favorite on the album. But wait! There’s more…

“GROOVY POTENTIAL”
This! This is my favorite Prince song of this decade so far. It’s a long jam with funky dancey parts, quiet mellow parts, and all points in between. It reminds me of what Prince felt like when I first started absorbing his music in 1984. Those beautiful songs that weren’t hits on 1999. Those now-classic b-sides from Purple Rain. Those songs branched out and tried things, but were still complete and excellent songs. The drums on this have a very organic feel. The breakdown towards the end where the beat switches up is a moment I treasure. The midpoint where everything goes to hush and Prince lets out of of his famous screams gives me chills every time. It all comes together so perfectly on this song. And yet, it feels like a long lost b-side. But one of those b-sides that makes people say “some of Prince’s b-sides are better than his a-sides”. A bit out of the norm to be a pop hit, but perfect as a Prince song. The song was released as a download in 2013 from his 3RDEYETUNES website, but it fits perfectly here on this album.

“WHEN SHE COMES”
Aaaaand the Prince that uses double entendres is back! This is one of my favorite ballads of his in some time. It recalls a vibe somewhere between “Adore” and “Dark”. I am so glad that Prince has chosen to highlight his horn section once again. I don’t think many people realize how much of an importance his horns had on many of his classic songs. While there are no liner notes yet (a problem faced when you only have digital releases), this appears to be much of the same horn section that has been with Prince since the early 90s. It shows!

“SCREWDRIVER”
It’s baaaack! This hot little rocker survived to an album. It’s essentially the same version released as a single in 2013, but with some reverb added to the vocals, and maybe some audio tweaks. This was one of the first 3RDEYEGIRL tracks and still very much stands up. It’s nasty without being vulgar, which is a delicate balance I think Prince is finally figuring out. And it’s an irresistible bouncy fun song to give you “party toes”.

“BLACK MUSE”
Supposedly this is one of the older tracks here, having been played once on a tour several years back. Yet this feels new. A tribute to Prince’s upbringing and his heroes. He does that idea justice with quite the funky workout. If the 2010 performance was any guide, longtime backing vocalist Shelby J is on this one, and it had been slated for the unreleased album Welcome 2 America. Most likely with some tweaks since, it now has a home here.

“REVELATION”
It’s time to light the candles. This is *that* slow jam. It was previewed during the Art Official Age listening party, but here it is. Soon to be one of his classic quiet storm ballads. Beautiful sax from Marcus Anderson of the NPG Hornz is the icing on the cake.

“BIG CITY”
This is the big finale, encore, rev up ending. It highlights the soulful playing of his band (are they still called the NPG when it’s not 3RDEYEGIRL?). It has a bit of an early Chicago feel, with some interesting jazz structures built into the chorus, which makes it not just a typical big funk rock song. I do remember reading that Prince was once influenced by early 70s Chicago (Chicago Transit Authority most likely). Ledisi also makes a guest appearance here in on vocals. According to princevault.com, it dates from 2013 and also features Donna and Ida, pre-3RDEYEGIRL among the NPG. This “best of both worlds” lineup jam finally has a rightful home here.

I am beyond impressed with this album. While yes, it plays like a collection, especially when I have singles of about half of the album, it also works beautifully as an album. These songs all fit nicely next to each other. One thing to remember in being critical is this. Prince has always reworked vault tracks until he felt they were ready. 1990’s Graffiti Bridge contained tracks from 1981 forward that had been reworked and tinkered with, for example. Prince has even mentioned in an interview that surfaced and then disappeared for Ebony, that choosing the tracklist and album structure was very important. It doesn’t quite feel right considering this part two of HITnRUN Phase One though. The only link I can see is that they are opposite sides of the same coin. While parts of Phase One had to grow on me, Phase Two feels like home. It is immediately satisfying. My only standing complaint is with Prince’s production choice of mastering the tracks all so loudly that there is serious distortion and clipping on every track. Something with such lush horn sections loses the space to breathe. But even after that choice is made, this is a thoroughly satisfying Prince album. It would be a crime for this one not to be sold in actual stores where more people can find it.

BIG UPDATE! As of two weeks ago, you can now preorder HITnRUN Phase Two HERE on 4/29!