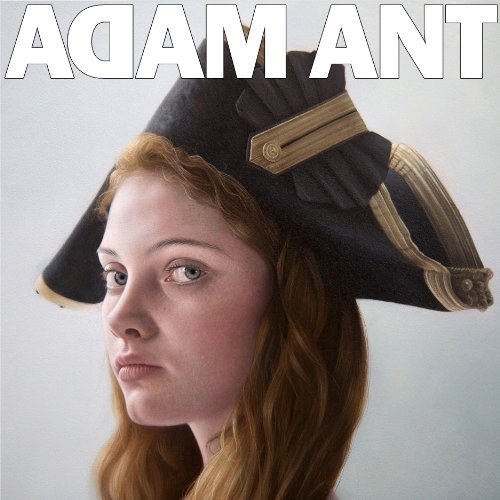 What. The. Hell?
Am I being punked? Is this *really* the new Adam Ant album? Look. I understand that Adam has dealt with serious mental problems in the vast timespan since 1995’s Wonderful. But why does this album sound so awful? Was there seriously nobody to take one listen to this album and say “Adam… we’ve gotta talk.”?
It was so promising too. A couple weeks back Adam dropped his first single, “Cool Zombie”. It was weird, creepy, not quite what we’re used to. But it was catchy as hell and somehow it worked. I’ve actually had the song stuck in my head quite a bit since then. So that starts the album, and then track two, “Stay in the Game” starts with some promise, but the instruments are all mixed badly, with really loud low bass, guitar that is milked down to only high pitch treble and everything regulated to a bad mono-sounding backdrop. The mix is hard on the ears but the song itself is not bad at all. Then “Marrying the Gunnar’s Daughter” is very electronic driven, very much early Nine Inch Nails inspired and then somewhere in the middle it’s like Adam just wandered away from the mic and kept singing not caring if we heard the song in his head or not. Damn shame really because it kills the song. We get to “Vince Taylor” and here’s where it just falls apart. The sound quality is wretched. The vocals just come and go and are so poor. This would be considered bad by even demo standards. It’s the kind of thing that would be on the end of a deluxe edition for historical context, but listened to only once. “Valentines” is where I’m ready to surrender already. It’s torture to listen to a chorus of out of tune badly overlaid vocal tracks. This makes “Vince Taylor” sound good by comparison.
“Darlin’ Boy” gets *even* worse. It’s just a track full of out of tune warbling. This sounds like a night of really horrible karaoke. It reminds me of some of those very early Beck demos where you try to listen, thinking my goodness what drug did he ingest before pressing record?
I feel like at this point I’m literally listening to somebody’s mind fall apart. It’s sort of like listening to a later period Syd Barrett recording. One of the bad ones where they were just panning for gold but coming up short. Except on Syd’s stuff you could at least understand the words and the producers made and attempt to make it all sound as good as possible. Not the case here.
“Punkyoungirl” offers some slight promise of a reprive with its electronic synth beat. Nope! Out of tune warbling and “lift up your skirt, let me lick the alphabet”. Seriously. The song sounds like an indie record art project gone horribly wrong. Then there’s “Sausage”. What the flying fuck? It’s just mumbling with out of tune… umm… “harmonizing”.
If we skip a few tracks ahead we get to “Shrink”. This is Adam Ant again showing his heavy Nine Inch Nails influence, but this track actually sounds produced. But then it falls apart with screeching out of tune singing. Dammit! Foiled again! The lyrics are “Your 15 minutes is up”.. and then later I can make out in the chorus “is it me or is it just medication?”
Then we get to “Who’s a Goofy Bunny?”. It has a country bar blues kinda feel and actually starts off sort of good. Then the chorus happens.. again tone-deaf-as-hell.
It’s fitting the second to the last song is called “Bullshit”. Somehow *this* of all songs is decent. Is this whole thing a prank? In fact this is the only song on the album that comes anywhere near to reminding me of the Adam Ant I grew up loving.
I really try to be the guy that finds something good in everything. I’m sure that Adam Ant had some great ideas buried under all of this. But over 75% of this album is simply unlistenable. I feel almost embarrassed for him because I’m sure he thinks he’s returning to glory. And I really wanted him to. But his voice is nowhere near ready. He needs at least one or two of his old co-conspirators back to help with the music production. At least a little bit of quality control. I want to feel joy when I listen Adam Ant, but this just makes me feel sad.
Now excuse me while I go blast “Vive Le Rock” and try to forget this experience ever happened.

Since there are no videos or youtube tracks other than “Cool Zombie”, here’s an interview Adam did about the album: