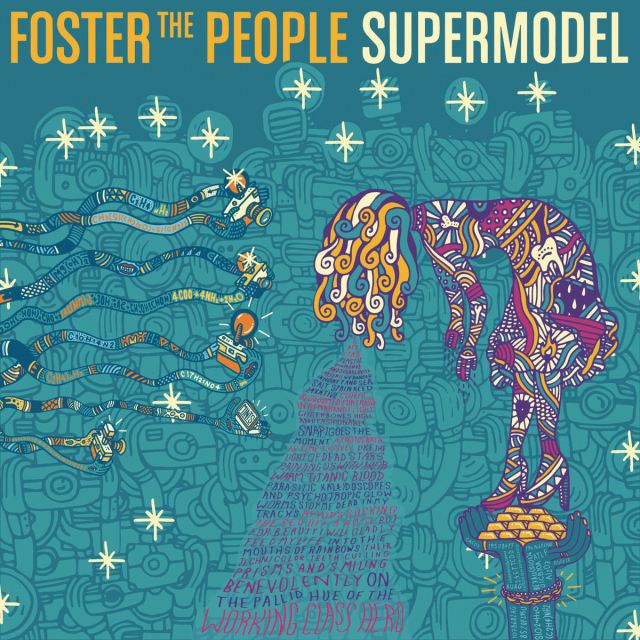 This year Foster The People released their second album, Supermodel, which was in some ways a complete left turn from their near-perfect debut Torches. Instead of electronically driven pop hooks and catchy layered harmonies, this album contains… well it still contains layered harmonies, but not as catchy this time. Instead, Mark Foster looks inward and questions his future, and the future of the world around him. Normally I’d find this disappointing, and on first listen I was ready to dismiss the album at first as only having a couple great songs, namely “Coming of Age” and “Best Friend”. But the haunted melodies of the darker and more reflective songs sank into me more with each listen. While I’m still going to be inclined to reach for Torches as a pick-me-up album, Supermodel is a well-crafted album, with a lot of thought in its lyrics and execution. Slowly but surely this album has become an unlikely favorite of mine.

Here is my original review from earlier this year when the album came out:
—

Foster The People’s second album Supermodel is a rather challenging one. According to frontman and writer Mark Foster, his mindset changed after being on the road for two years supporting Torches. Then he traveled to other countries such as India to clear his head. The musical tones on Supermodel definitely show this, as there is a lot of percussive layering. This is an expansion of some of the live versions of songs on the Torches tour so it is only natural. But the lyrics have taken a much darker turn.

It’s apparent from track one that Mark Foster is questioning if he is happy with his newfound popularity. “Are You What You Want To Be” asks this question possibly of others and of himself. The music has a definite haze to it. A musical brain fog if you will. It still has shades of the last album though, along with some new dub echo added. This song is his audible fork in the road. Does he make Torches 2 or does he carve out new ground?

“Ask Yourself” stays on the same topic, with a bouncy handclap beat under a melancholy melody. He sings “I’ve found the more I want the less I’ve got”. One one hand the song is about being grateful for what you have. On the other it’s a careful what you wish for song. The lyrics are almost a 180 from the self-confidence and hope found in “Houdini”. The guitar here does hark back to 80s alternative rock which is a nice new touch. Next is “Coming of Age”, the first single and definitely one of my favorites here. Topically, Foster sounds like he’s on the verge of something major in his life, he’s just not sure what it is. The percussion and the layering in this track give it a warmth that reminds me of a humid summer night. As conflicted as I am about where the album is going lyrically, this is probably one of my favorite songs by Foster The People to date.

“Nevermind” comes in next with acoustic almost tropical guitar. What a change! The melody of this is a bit haunting. This is where Foster’s disillusionment with modern first world culture creeps in. “It’s hard to the truth in this post-modernist view”. As pointed out in the album artwork, Foster feels we have shifted too much towards attention-seeking online personalities and less towards being actual people with the ability to communicate with each other in a real way. “Pseudologia Fantastica” seems to continue in this vein with lines like “You’d off yourself to save your reputation”. This is a great track with a strong beat to it and washes of synths and guitars making one big wall of haze. However that haze is a color used to paint the emotions behind these songs. “The Angelic Welcome of Mr. Jones” is a short acapella continuation of the song separated into its own track.

The second half kicks off with the strongest track on the album “Best Friend”. This one sounds the most like classic Foster The People for those who can’t get enough of Torches. However even here we have new flourishes of horn blasts and some new vocal arrangements. Such an upbeat and joyful song, while the lyrics are about watching your friends go through addiction. I’ve had this one stuck in my head all week since first hearing the album. Next is “A Beginner’s Guide To Destroying The Moon”, also quite a strong track with some gritty guitars and a much more hard rock base to it. However, Mark Foster has some stellar falsetto parts on this one that make it shine. This one is a bit more hopeful and motivated in its lyrics with “Are you ready to drink or are you ready to drown?”.

“Goats In Trees” is the one title that needs some explanation when you read the list of songs. This one is a guitar strummer with lyrics that seem like a strange dream metaphor about pulling away from negative people and their mental grip. Musically this is a detour from anything they’ve done before. “The Truth” comes back to the overall feel of Torches. Lyrically it is a progression from the same theme of “Goats In Trees” about staying positive and true in the face of what’s negative. The lyrics and melody are both warm and uplifting. The final track is a quiet acoustic song called “Fire Escape”. Lyrically Foster is begging L.A. to “save yourself”, going back to the theme of being disillusioned with modern American culture and longing for true connection. The song is like nothing the band has done before but is extremely heartfelt and beautiful.

The itunes preorder version gives one more track, “Tabloid Junkie”. This song fits right in, and takes a few twists and turns in its six minutes. A lot of the adventure Mark spoke of in the preview clips about the album is all found in this track. Very meticulously placed effects and twinkles of strange notes, lots of reverb and hazy dreamlike sounds are topped with a half-assured “but I’m okay”. Definitely an interesting extra track if you can grab it.

At the end of it all, this album isn’t going to be for everybody. I’ve given it some patience and multiple listens, and I do feel that the musically dense structures unfold with each listen. The lyrics are full of disillusionment and indecision unlike they were on Torches. This gives the whole project a completely different tone. But to immediately dismiss that as bad is unfair. As an artist and writer, Mark Foster is expressing exactly where he is in life at this moment and trying to paint a picture for us. And this picture isn’t the same one from three years ago. Like many paintings, if you look too close you focus on the emotions put into the strokes, but when you back away the whole picture is a totally different story altogether. Torches was one of my favorite albums so far of this decade, so that’s a high standard to measure against. But on its own merit, this album has a lot of depth and honesty and deserves my time to get to really know it. I’m definitely becoming more absorbed with each listen and my prediction is that in a few months I will be fully in love with this album for all of its dark beauty.

Get your own copy of Supermodel HERE:

Check out some videos and performances from the album HERE: