If you haven’t heard of Semi Precious Weapons yet, you will. The band has a unique blend of old school glam, trashy party pop and gritty face-melting rock n’ roll. Since their last album You Love You, the guys have been playing gigs from one coast to the other, eventually finding a new home in L.A., a brand new label, and some brand new sounds to add to their own. The wait is almost over, as the new Semi Precious Weapons album Aviation will hit stores and mp3 outlets April 22nd!
Cole Whittle, madman at large and diabolical bassist for SPW was kind enough to take some time aside  to answer some questions about what the band has been up to. And he had some wild answers! So here it is:

1. First of all – welcome back! We’ve missed you! Since releasing You Love You in 2010 and the ensuing Monster Ball tour, things got kind of silent for a while. I understand the band was stuck in a form of record label purgatory before finding your new home on RedZone. Can you tell us much about the label drama you had to endure?

COLE: The label drama we experienced was unavoidable and unpleasant, but we dealt with it all in a productive way. We got drunk and wrote hundreds of songs.

2. One of the first things many of us notice on the new songs since YLY is a new pop sheen and the addition of electronics (keyboards, programming, etc) added to the mix. How did the new elements come to find their way into the SPW sound?

COLE: After being on the mega pop tours and partying in dance clubs every night, we noticed how much power was around us. We were these raw mortals, and everything else sounded like a hot transformer or Euro-Rambo on a jet ski. We wanted some of that in our lives, so we explored the electronic world to see what worked in SPW.

3. What’s the biggest lesson you’ve learned so far touring with pop giants Lady Gaga and Ke$ha? Did it change how you look at touring?

COLE: Gaga and Ke$ha taught us that you have to work 21 hours a day to be a boss, and be wasted the remaining 3 hours so you can wake up and not remember having worked the 21 hour shift. Also you have to be cool 24 hours a day.

4. What’s your favorite of the new songs so far to play live and why?

COLE: I really love to play “Never Going Home” because I feel it makes me feel like I’m in a UFO with Kate Moss. John Cougar Mellencamp is the pilot, and Bryan Adams is the co-pilot. Penelope Cruz is a stewardess.

5. Which artist or artists in the last five or so years have really influenced the way you play bass?

6. What is the craziest thing to happen to you during a show so far?:

COLE: One night in Montreal, the promoter of the concert beat up three different audience members during our set. It was mostly spinning jump kicks to the face, but included a female choke out. I won’t name any names. He’s a legend and we love him all he same. They probably deserved it.

7. I see that Tricky Stewart helped produce some of the new songs. How was that experience as compared to working with Tony Visconti who I would think to be on a different side of the production spectrum. (Or was it really even that much different?)

COLE: Visconti is to hip college professor as Tricky is to toga party.

8. As maniacally wild as you get onstage every night, how many bones have you broken during shows so far?

COLE: I’ve probably broken more than I realize, because I walk around like a wheelbarrow full of rocks. My kneecap has a hole in it, I got a chipped front tooth, broken big toe, separated shoulder, and face stitches in Japan. Justin broke his arm in Oslo, Dan’s fingers have vaginas, and Stevy is invincible. All that said, the worst injuries are mental.

9. The band has moved from New York to L.A. I understand. How has the adjustment been switching coasts?

COLE: We were on the road for two years between NYC and landing in LA. I don’t think there was an adjustment because we were so dazed and confused, but we like the beach side.

10. Why “Aviation”? Why windmills? (I was predicting it would be called “You Love Us, You Really Love Us” or “We Love Us” or something like that)

COLE: We wrote so many songs, and imagery of the sky, space, flying, and all things upward kept surfacing. It was natural. We do really love y’all doe. 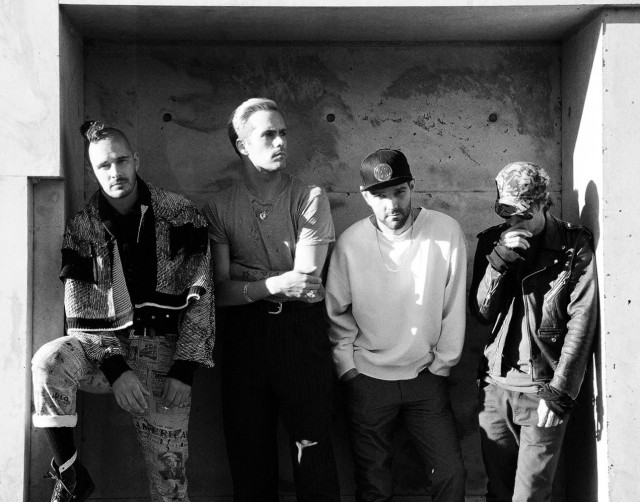 Anything that doesn’t blow up or evaporate when I touch it.

First concert you ever attended?

Spicy Bloody Mary and I pretend its not vodka.

and finally… Who would win in a celebrity deathmatch, Gaga or Ke$ha?:

It would be a stalemate because they would stop killing and start you-know-what-ing. I’m the ref.

Thanks so much to Cole for taking the time out of his busy schedule prepping for Aviation‘s release to answer these questions!

In the meantime you can get the 4 song Aviation E.P. HERE:

And check out the videos for the songs out so far:

“Look To the Stars”